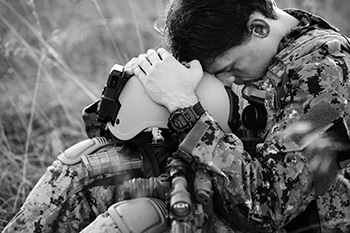 But this is not the complete story. There are subtle differences between the two mental health disorders. Let’s find out what they are:

Acute stress disorder was recently included as a new diagnosis in DSM-IV to describe posttraumatic stress in the initial month after a trauma. Acute stress disorder consists of dissociative, re-experiencing, avoidance, and arousal symptoms. The main difference between acute stress disorder and PTSD is the requirement that for the diagnosis of the former, three dissociative symptoms must be present. A primary reason for the introduction of this diagnosis was its alleged capacity to identify traumatized individuals who would subsequently develop PTSD.

A real-life scenario to understand ASD and PTSD

Imagine you’re at war amidst a river of blood and air filled with the toxic smell. The atmosphere is intense and nerve-wracking. Series of gunshots are coming in your way. They can touch your body and end your life within a fraction of second. You’re using all your acquired military skills to dodge the gunshots and defeat the opponents. While you’re busy fighting with a soldier, you don’t realize that a gunshot is coming your way from behind. The next second, you fall flat on the ground and feel someone’s heavy body tumble over your back.

When you come back to your senses, you realize that your colleague’s dead body is resting on your body. He has sacrificed his life for you.

The situation is traumatic. Your heart is beating fast, your blood pressure is high, and you’re breathless. Your body is tensed, your nerves are on edge, and you feel completely blank.

Honestly speaking, this is the way our bodies and minds work in stressful situations. It’s normal to endure significant distress after a few days of the distress. But what if you feel ‘on-edge’ even after 3-4 days? You’re not in danger. The war is over. Still, you get flashbacks and nightmares. You feel numb and don’t like to talk to anybody.

When you find it difficult to cope with the aftermath of trauma even after a month, then it’s classified as post-traumatic stress disorder. It’s a chronic anxiety disorder that develops following exposure to a traumatic event and stops you from leading a normal life.

Unlike ASD, the symptoms of PTSD can develop several years after the traumatic incident has occurred. Another difference is that PTSD may develop even if symptoms of ASD have never existed.

Comparing post-traumatic stress disorder and ASD has much to do with how long nerve-racking symptoms last following a traumatic event or how much time has passed between the event and the onset of distressing symptoms.

PTSD and ASD – Understanding the difference between the two

The duration of the disorders is different.
The timing of their onset is also different.

Symptoms of ASD and PTSD – A quick view: 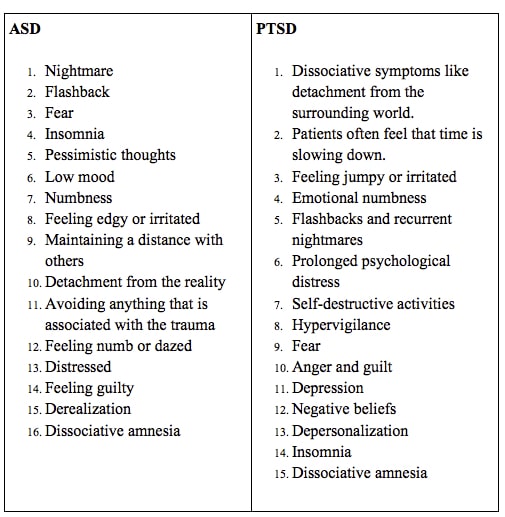 ASD and PTSD – Proper treatment is right in front of you

Both ASD and PTSD are major mental disorders. People with ASD have a high chance of developing PTSD. Due to the dissociation symptoms, an individual may forget major parts of the event and the emotions they experienced. This might hinder the recovery process. This is why psychiatrists say that early intervention is necessary.

Early medical treatment can help someone to avoid PTSD in the future. A psychiatrist can suggest several strategies to cope with the distress competently before it becomes chronic. He can pave the path to a speedy recovery. So if you know someone who has ASD or PTSD, ask him/her to consult an experienced psychiatrist as soon as possible. The sooner he gets in touch with a psychiatrist, the sooner his best life begins again.

Like it has been said before, it’s a mistake to overlook the symptoms because the presence of the symptoms implies that the person is struggling to recover from traumatic distress on his own. One shouldn’t consider ASD or PTSD as normal distress. If someone neglects or overlooks the symptoms, then he can develop multiple disorders simultaneously. For instance, depression and substance abuse.