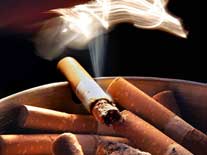 There are all sorts of reasons for people to quit smoking, and for people with mental illnesses, there are even more.

Smokers with mental illnesses are at an accelerated risk of diabetes, heart attacks, and stroke. In addition, smoking has adverse effects on many of the most common psychiatric drugs. The negative effects of nicotine and other substances in tobacco smoke are little understood, but research is turning up many ways in which they are thought to be harmful to the body and mind.

Evidence is rapidly emerging that smoking may actually cause mental illnesses such as depression and Anxiety Disorders. It can greatly multiply the risk of panic attacks and other common mental conditions.

This post is the second in a 2-part series concerning smoking and mental illness. Part 1 discussed why people with mental illnesses smoke up to four times the rate of the general populace, along with findings about the higher rate of mental illness among smokers. This part deals with the following topics:

Why Should Someone With a Mental Illness Quit Smoking?

The health reasons for quitting smoking have been well-known for years. But for the mentally ill, there are even more urgent reasons, including cigarettes’ effects on medication, and even more serious health risks than the general populace. Kristen Moeller-Saxone from the University of Melbourne’s Melbourne School of Population Health, says,

Many mental health professionals find that those with a mental illness find it particularly difficult to stop smoking. There is ample anecdotal evidence that says the same thing; it is well known that members of Alcoholics Anonymous find it more difficult to quit smoking than to quit drinking. Besides giving up the benefits of smoking listed under “Why Do People With Mental Illness Smoke?” in part 1, the elimination of nicotine produces emotions that many of the mentally ill find difficult to cope with.  Schmitz, Kruse, and Kugler say,

[P]eople who have difficulty coping with stress, anxiety, and depression are more vulnerable to dependency (somehow [nicotine] allows them to escape emotionally); that dependency may cause a vicious cycle — not being able to quit is stressful, which can increase anxiety.

Can smoking cause mental illness?

Traditionally, it has been held that one is mentally ill first, and a smoker second. People with a mental illness start smoking, and smoke more, because nicotine relieves their symptoms and makes them feel better. In addition, they may be more psychologically vulnerable to nicotine addiction or the allure of tobacco advertising.

There are a growing number of studies that suggest that mental illness, including common conditions such as Anxiety Disorders and depression, can actually be caused by smoking. For example, a University of Cincinnati study of 8,704 teenagers found that mentally healthy teenagers who start smoking are four times more likely to develop depression than their nonsmoking peers.

Harvard University researchers studied cigarette smoking and mental health in 4,500 adolescents and adults. Mentally healthy teenagers who smoked at least one pack a day had a:

How could cigarette smoking cause mental illness? Experts don’t know. There are several plausible theories, including:

Although it is much harder for a person with a mental illness to quit smoking, the reasons are all the more compelling: accelerated susceptibility to diabetes, heart disease and strokes; and the fact that smoking reduces and/or changes the effectiveness of psychiatric medications.

This article was difficult to write, because it tells some uncomfortable truths about smoking and mental illness. I am a smoker who took up the habit as a teenager, long before I was diagnosed with any mental illnesses. In retrospect, I was already having symptoms when I started smoking, but it is possible that smoking caused these and other symptoms to become worse.

I have learned that I have what I call “an addictive personality,” so I gave up drinking alcohol a number of years back because it was beginning to become intrusive in my life. But I have not been able to give up my smoking addiction despite numerous attempts, both with and without medication. I know it’s just a matter of time before I will be forced to give up smoking for one reason or another, yet I find quitting as hard as anything I have ever done in my life.

I enjoyed this article very much as I am a sufferer of anxiety and panic attacks. I’m not really sure what came first, the smoking or the anxiety, because I started smoking when I was very young (12 years old).
I did have a few panic attacks, starting from when I could first remember 4-5 years old. Of course at that age, I didn’t know what they were and assumed that something was physically wrong with me. The bigger problems started when I was around 12 years old and smoking.
Anyway, I tried to quit a few times previously (one time lasting 4 months), but I always went back to it due to my mental status. I never felt good emotionally and I sunk into deep depression each time.
Now I’m on my most recent attempt to quit. It has been a little over 3 months and out of the blue I’ve started getting panic attacks like I did when I was a kid. The quitting process wasn’t too bad as I used the nicotine patches and psychologically that pulled me through. I’ve been off them for 5 weeks though and I can see what a powerful effect nicotine had on my anxiety levels!
I think that I have been self medicating my anxiety with cigarettes for all these years. Now the nicotine is gone and everything is roaring back. I don’t want to start smoking again obviously and I don’t want to start taking medication either. That leaves me in quite a bind!

true… nervous and weak after smoking.