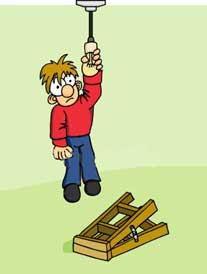 I have some very good news: The mental health parity bill passed Congress just a couple of hours ago, and it is predicted that President Bush will sign it into law!

This means that insurance companies are now forced to offer the same coverage and copays for mental health services as they do for physical health.

The legislation, which recognizes the importance of mental health to overall health, bans employers and insurers from imposing stricter limits on coverage for mental health and substance-use conditions than those set for other health problems.  It will provide parity for 82 million Americans covered by self-insured plans and another 31 million in plans that are subject to state regulation.

It is estimated that roughly 67 percent of adults and 80 percent of children requiring mental health services do not receive help, in large part because of discriminatory insurance practices.

If it can go wrong, it will!

Murphy, he of the Law, has been hard at work at Anxiety Central this week! It seems that everything that could go wrong did go wrong!

I was under the weather for several days, and I could not concentrate enough to write. “That’s OK,” I said to myself. “I’ve got enough research and work in progress to write several good posts this week.” How wrong I was!

My old reliable computer, the workhorse that I’ve bragged about in the FAQ, has decided to start crashing unpredictably several times a day. The database that I keep my research in and where I do all my writing has become corrupted twice this week, forcing a rebuild that takes six hours each time. Checking the boot drive for errors takes another hour. To make matters worse, programs that used to stay open for days keep quitting unexpectedly every few minutes, making life very frustrating. This program quit once while I was writing this post, and my browser quit while I was posting it!

It reminds me of Flagle’s Law of the Perversity of Inanimate Objects:

Any inanimate object may be expected at any time to behave in a manner that is entirely unexpected and totally unpredictable for reasons which are completely unknown or thoroughly obscure.

As a result, I have lost three days worth of work, both research and writing, along with the time it took to fix things. Even though I back up daily, Murphy’s Law says that the crashes will happen right before the appointed time for the backup.

The bottom line of this tale of woe: That’s the reason that there’s been only one other post this week, where I usually post four.

The hippies had it right

Burning incense, it turns out, can alleviate Anxiety or depression. So says a new study from Johns Hopkins University and Hebrew University in Jerusalem. The frankincense incense activates poorly understood ion channels in the brain and causes antidepressant-like behavior. This suggests an entirely new class of depression and Anxiety drugs that, literally, might be right under our noses! Gerald Weissman, editor of the journal in which the study was published, says,

This study … provides a biological explanation for millennia-old spiritual practices that have persisted across time, distance, culture, language, and religion — burning incense really does make you feel warm and tingly all over.

Read more about the study in Science Daily.

Have a great weekend!

Related Posts:
<= Previous Posts I’m Dying: What a Panic Attack Feels Like
Next Posts => Mental Illness Awareness Week: A Cause We Can All Support!
4 comments… add one

Oh Mike – that’s a lot to deal with all at once. I hope you burned some incense ;-)

One day last winter I spent the entire day at a lawyer’s office and at family court due to some emergency custody issues. It was one of the worst days of my life. Then when I got home my computer was locked up and when I rebooted it wouldn’t start up – the hard drive was dead! Fortunately, I did have a backup but I can totally relate to the Murphy’s Law scenario – it was all too much to handle in one day.

And I guess all of this kept you from installing commentluv …

Are you going to need a new computer? Or have you diagnosed the problem?

Thanks, Kim, I am feeling better. The crashes etc. were 3/4 the way through the day, so it was inevitable that I lose work. The worst was when I was putting the finishing touches on an exposure therapy post that I’d spent almost 5 hours on – computer crashed while I was saving, so it was completely gone! I didn’t lose the research, thankfully, but with 11 sources, it was a real chore to put together. I hope to get it rewritten and posted today.

The database I use to write in, DEVONThink Pro, is not entirely a database; it’s also a place to dump anything you can think of, part relational search tool, and part writing tool. The file size is over 9gb, so it takes hours to rebuild. It’s one of the most reliable pieces of software I have, but it was corrupted twice last week. Sigh.

I’m using a 4-year-old Mac Dual 2, which has been very, very dependable up until lately. The hard discs are new, so they ought not to crap out on me. I think some of the memory is bad, but the tests all show everything to be ok.

I’d like to get a new computer, but I can’t afford it right now. So I’ll just have to keep my fingers crossed!

Sometimes I think Murphy has taken up residence in my printer; why is it that you *always* run out of cartridge ink when you’re in a hurry for something?

Yes, Murphy is always lurking in the background to make new correlates to his Law! Like my browser crashing just as I’m finishing entering my post. Or every traffic light being red when you’re late to an appointment.

A great Murphy’s Law site is, oddly enough, the Murphy’s Law Site. It has a set of his laws for almost every profession and situation imaginable.