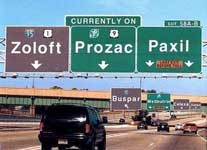 Antidepressants are often the medication of choice for addressing Anxiety Disorders.

Antidepressants all work because they affect serotonin, an important neurotransmitter in the brain that acts as a chemical messenger. They were first developed for depression, and later were found to be effective for treating most types of Anxiety Disorders, too.

Those taking antidepressants for the first time and even those who have been taking them a while often have many questions about them. These questions may not be answered fully by their doctor or by the information on the prescription bottle.

This post answers the most common questions that people have. If you have further questions, please do not hesitate to ask them in the comments or in a personal message using the “Contact” tab. Please note that this post does not cover the antidepressant medications in detail — there is another post entitled “Medications for Anxiety, Panic and Phobias” that does that.

What are the antidepressants usually prescribed for Anxiety Disorder?

Not all antidepressants work with Anxiety Disorders, but most do. Any antidepressant that has an effect on the serotonin system can be helpful for patients with anxiety.

Wellbutrin is not used for Anxiety Disorder because it is the only antidepressant that does not affect the serotonin system. It can even cause Anxiety and agitation in some patients. It is sometimes used in combination with SSRI’s for Anxiety Disorder to diminish the side effects of SSRI’s.

How does my doctor choose which antidepressant to give me?

All the SSRI’s and SNRI’s, Tricyclic and MAOI’s work the same way. The choice among them is made mostly on the basis of side effects and a person’s ability to tolerate a specific medication.

Most of the antidepressants are started at a low dose and gradually increased until they reach a therapeutic level. Some antidepressants also need to be gradually decreased in dosage when discontinuing them, particularly the SNRI’s, Effexor and Cymbalta.

How long does it take an antidepressant to start working?

It takes from two to six weeks for an antidepressant to begin to work. You may feel worse before you feel better because side effects can occur almost immediately, whereas therapeutic benefits appear later.

What are some of the side effects of antidepressants?

An adjustment in dosage or a switch to another antidepressant will usually correct bothersome problems. It is important to discuss side effects with your doctor so that he or she will know when there is a need for a change in medication.

Anti-depressants are not physically habit-forming and are not drugs of abuse. However, people sometimes become psychologically dependent upon them to relieve their symptoms, particularly if they have not participated in therapy, which teaches coping and management skills.

My first antidepressant didn’t work. What should I do?

It is not unusual for the first antidepressant tried either not to work or to have intolerable side effects. Finding the appropriate medication and dosage may take time. There are many antidepressants to choose from, and one of them is right for you.

The most frequent reasons for an antidepressant failure are that the dose was too low or the duration of treatment too short.

I feel so much better. Can I stop taking the antidepressant?

Feeling better is not a good reason for discontinuing or reducing your medications. People often are tempted to stop medication too soon, risking relapse or recurrence. For some Anxiety Disorders, medication may have to become part of everyday life to avoid return of disabling symptoms.

I want to take some herbs and diet supplements. Are they safe with antidepressants?

You should never mix medications of any kind — prescribed, over-the counter, herbs, or borrowed — without consulting your doctor. Some substances, like alcohol, reduce the effectiveness of antidepressants and should be avoided. This includes wine, beer and hard liquor. Grapefruit juice also has a negative effect on some antidepressants. Always follow the instructions of your doctor and on the prescription label to the letter.

Some medications, which are usually safe when taken alone, can cause severe and dangerous side effects if taken with other drugs. Always tell dentists, pharmacists and other medical specialists that you are taking antidepressants.

How long will I have to take antidepressants?

The length of time you will need to take antidepressants varies from person to person, and depends on the severity of the Anxiety Disorder. It also depends strongly on whether the drug is taken alone or is combined with therapy.

Are antidepressants enough to control my Anxiety Disorder?

Antidepressants work best in most people when prescribed alongside a course of psychotherapy. People taking both medication and engaging in psychotherapy generally take less time to feel better. They also maintain their gains longer than those taking antidepressant medications alone.

Where do I find information about the medications I am taking?

It is sometimes hard to tell if what you are feeling is a drug side effect or a symptom of a physical condition. It is a good practice to look up the drugs you are taking and make a list of the “normal” side effects and the serious side effects. That way you will know when to call the doctor about an uncomfortable feeling or illness. And you will also be better informed about your side effects when you visit your doctor.

These online resources are particularly good for researching prescription medications, over-the-counter drugs, and diet supplements, such as herbs:

When taking any medication for Anxiety Disorders, you should…

Despite the long list of facts, taking antidepressants is not a complicated affair. However, it is very important that you:

del.icio.us. Check out the icons below under “Share This Article With Others” for other social media, including Technorati, Sphinn, Friendfeed, FaceBook and MySpace! You can also email or print the article, and even tweet it using Twitter!

<= Previous Posts Radical Approach to Therapy for Anxiety Disorder
Next Posts => I’m Dying: What a Panic Attack Feels Like
55 comments… add one

I know this web site presents quality based articles and other stuff, is
there any other website which presents such data in quality?

Hello my daughter has been having lot of probz recently and the doctor asked was anybody in the family tricyclate can anyone advise us what that is please.

The most frequent reasons for an antidepressant failure are that the dose was too low or the duration of treatment too short. SO helpful with me

Fantastic web site. Plenty of helpful information here. I am sending it to a few buddies ans also sharing in delicious.