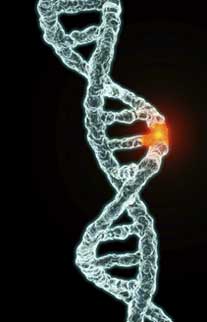 The recent decoding of the human genome has lead to advances in determining genetic risk profiles for particular illnesses. The best known and scientifically credible discovery is the link between the BRCA genes and the development of breast cancer.

The companies marketing these tests obviously believe that they are reliable and accurate. But the scientific community has been almost universally opposed to the tests.

Are there reliable genetic tests for mental illnesses given the current knowledge of the human genome? Can there ever be reliable tests? And what about the ethical questions genetic tests raise? All these issues and more are discussed in this post.

At this time, science thinks that genes appear to influence the development of mental disorders in three major ways:

There have been many studies of large pools of families that indicate that mental illnesses run in families, and are therefore hereditary. The groups of families studied are large enough to factor out other variables such as the family environment in which a person is raised. In addition, there have been even more large-scale studies of twins, both fraternal and identical, that have found that, without a doubt, mental illness vulnerability can be inherited.

If mental illnesses run in families, and are found to be hereditary among twins, then the genes passed down from parent to child must play a role in a person’s vulnerability to a mental disorder. This much almost everybody is in agreement with.

Also agreed upon is whether or not one develops a mental illness depends on unknown ways the risk genes interact with other factors, such as environment and personality traits.

How many genes are involved in inheriting mental illness?

There is a great deal of controversy these days in the scientific community about the exact role that genes play in a person’s vulnerability to mental illnesses. There are some that argue that there are single genes or small groups of genes that determine it, while others hold that there are large groups of genes that work together to form this vulnerability. In addition, many believe that the genes that make for susceptibility to mental illness can vary between persons, or even between groups of persons.

The inventor of one of the tests for bipolar disorder, John Kelsoe, apparently believes that a single gene or a small group of genes can cause a propensity for that mental illness (the exact number and what they are is a trade secret). A respected psychiatric geneticist at the University of California, San Diego, he spent 20 years patiently searching for the genes behind bipolar disorder, tracing patterns of inheritance in families from Amish Pennsylvania to Iceland.

On the other hand, Rick Nauert, Senior News Editor of Psych Central states:

Most authorities … believe that psychiatric disorders develop because of the interplay between multiple genes, each exerting small effects. That makes finding the responsible genes harder. Further complicating matters, research has revealed that many healthy relatives of people with psychiatric disorders have risk genes.

No single or multiple genes found

The majority of scientific opinion is that to date, there has not been found a gene that acting alone causes any mental illness, nor have groups of genes been found to increase the risk. When it comes to assessing the risk of developing mental conditions such as bipolar disorder, Anxiety Disorder or schizophrenia, the genes responsible for most brain disorders remain unknown.

Francis Collins, director of the National Human Genome Research Institute (NHGRI) in Bethesda, Maryland, was taken aback to learn that a genetic test for bipolar disorder was on the market. In Collins’s list of accepted genes for common diseases, “there are no entries” yet for bipolar disorder, he says.

The state of the genetic art

Light shower before a thunderstorm

The Human Genome Project presented the complete map of the human genome only in 2003, and further analysis is still being published. One writer compared what is known about human genetics to a light shower before a coming thunderstorm.

According to experts writing in the May, 2008, issue of the Harvard Mental Health Letter, the genetics field is advancing so rapidly that it’s hard to keep up with developments, never mind figure out which ones are clinically relevant.

Scientists have identified perhaps thousands of candidate genes that may contribute to psychiatric conditions. But most candidate genes fail to hold up — meaning that the association between the gene and a given illness disappears when scientists try to replicate the results. One analysis estimated that 70% to 80% of candidate genes are false positives.

Aside from the issues of reliability for any test for mental illness, there are large ethical issues raised by genetic testing in general. These issues have kept many people who could take a test for a known genetic marker, such as that for Huntington’s disease, from taking it. Only 5 to 10 percent of those with Huntington’s in their family take the test.

There are many ethical issues that can be raised, but among the most prominent are:

The scientific consensus is that there is neither a single gene nor groups of genes yet discovered that might cause a mental disorder. The knowledge of the human genome is in its early infancy, and any discoveries being made have to undergo rigorous testing and replication before their reliability is proclaimed.

Being diagnosed with a mental disorder carries “great significance,” says Francis Collins of the NHGRI, who, like many in the field, thinks a test based on current knowledge is likely to be misleading.

In addition, there are a great number of questions being raised by these tests, among them:

Dr. Michael Miller, editor in chief of the Harvard Mental Health Letter, notes that someday it may be possible to reliably assess risk for psychiatric disorders. But at this point, the technology — and the science — is still evolving.

In my view, though the thought of a test for bipolar disorder or Anxiety Disorders is attractive, it is very dangerous to rely on any tests developed given the current state of the art of genetics. And the many ethical questions these test raise have not been answered satisfactorily.

Until the reliability of these tests has been established, and practices put in place to protect the people being tested, it is my strong recommendation that you think many times before taking them.

I’m really enjoying the design and layout of your website. It’s a very easy on the eyes which makes it much more enjoyable for
me to come here and visit more often. Did you hire out a developer to
create your theme? Outstanding work!