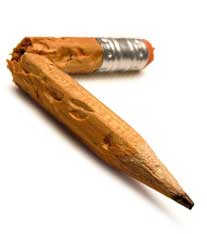 Many readers of this blog have requested short descriptions of the various Anxiety Disorders.

Detailed descriptions are available under the “Reference and Information” section of the right sidebar, but I realized that I had never provided a synopsis of each Anxiety Disorder.

This is the second in a two-part series briefly describing the major Anxiety Disorders. It covers:

A sudden surge of overwhelming fear

A panic attack is a sudden surge of overwhelming fear that comes without warning and without any obvious reason. It is far more intense than the feeling of being “stressed out” that most people experience.

Symptoms include a pounding heart, sweating, shortness of breath or a feeling of choking, feelings of unreality and the fear of going crazy or dying. In addition to these and other symptoms, a panic attack is marked by:

Panic attacks affect from 9.1 million to 17 million people in the United States. Women are up to three times as likely to have panic attacks as men.

The Diagnostic and Statistical Manual of Mental Disorders lists the following criteria for a panic attack:

A discrete period of intense fear or discomfort, in which four (or more) of the following symptoms developed abruptly and reached a peak within 10 minutes:

4. sensations of shortness of breath or smothering

9. derealization (feelings of unreality) or depersonalization (being detached from oneself)

Panic attacks reach a crescendo within ten minutes and typically last fifteen minutes. However, they may recur rapidly, and once the symptoms abate, a severely anxious state may not go away for several hours.

Panic Disorder is the most treatable of the Anxiety Disorders

Panic Disorder is at the same time the most treatable of the Anxiety Disorders, and the most devastating. It can progress very quickly from the first panic attack to major Anxiety to Agoraphobia if untreated. Panic attacks mimic dire physical problems such as heart attack, and disabling fear is characteristic of Panic Disorder.

The National Institute of Mental Health (NIMH) estimates that about 2 percent of American adults — six million people — have Panic Disorder. It is twice as common in women as among men. As many as thirty-six percent of people with Panic Disorder also have Agoraphobia.

The American Psychiatric Association’s Diagnostic and Statistical Manual of Mental Disorders (DSM-IV) lists the criteria for Panic Disorder as follows:

– Persistent concern about having additional attacks
– Worry about the implications of the attack or its consequences (e.g., losing control, having a heart attack, “going crazy”)
– A significant change in behavior related to the attacks

B. The Panic Attacks are not due to the direct physiological effects of a substance (e.g., a drug of abuse, a medication) or a general medical condition (e.g., hyperthyroidism).

C. The Panic Attacks are not better accounted for by another mental disorder.

PTSD is an Anxiety Disorder that can develop after exposure to one or more terrifying events in which grave physical harm occurred or was threatened. It is a severe and ongoing emotional reaction to an extreme psychological trauma. The PTSD sufferer is affected to a degree that usual psychological defenses are incapable of coping.

The National Institute of Mental Health (NIMH) says that PTSD currently affects about 7.7 million American adults.The Mayo Clinic states that 7 to 8 percent of the population, about 24 million, will have PTSD at some time in their lives. Women are more likely to develop PTSD than men.

The Diagnostic and Statistical Manual of Mental Disorders lists the diagnostic criteria for PTSD as follows:

A. The person has been exposed to a traumatic event in which both of the following have been present:

(1) the person experienced, witnessed, or was confronted with an event or events that involved actual or threatened death or serious injury, or a threat to the physical integrity of self or others

B. The traumatic event is persistently reexperienced in one (or more) of the following ways:

(1) recurrent and intrusive distressing recollections of the event, including images, thoughts, or perceptions.

(2) recurrent distressing dreams of the event.

(3) acting or feeling as if the traumatic event were recurring (includes a sense of reliving the experience, illusions, hallucinations, and dissociative flashback episodes, including those that occur upon awakening or when intoxicated).

(4) intense psychological distress at exposure to internal or external cues that symbolize or resemble an aspect of the traumatic event.

(5) physiological reactivity on exposure to internal or external cues that symbolize or resemble an aspect of the traumatic event.

C. Persistent avoidance of stimuli associated with the trauma and numbing of general responsiveness (not present before the trauma), as indicated by three (or more) of the following:

(1) efforts to avoid thoughts, feelings, or conversations associated with the trauma

(2) efforts to avoid activities, places, or people that arouse recollections of the trauma

(3) inability to recall an important aspect of the trauma

(5) feeling of detachment or estrangement from others

(6) restricted range of affect (e.g., unable to have loving feelings)

(7) sense of a foreshortened future (e.g., does not expect to have a career, marriage, children, or a normal life span)

D. Persistent symptoms of increased arousal (not present before the trauma), as indicated by two (or more) of the following:

(2) irritability or outbursts of anger

E. Duration of the disturbance (symptoms in Criteria B, C, and D) is more than one month.

F. The disturbance causes clinically significant distress or impairment in social, occupational, or other important areas of functioning.

SAD is overwhelming anxiety and self-consciousness

SAD is an Anxiety Disorder characterized by overwhelming anxiety and excessive self-consciousness in everyday social situations. People with SAD have a persistent, intense, and chronic fear of being watched and judged by others and of being embarrassed or humiliated by their own actions.

Individuals with SAD typically become intensely anxious, with increased heart rate, sweating, and other signs of nervous arousal during a social encounter. They may experience symptoms resembling a panic attack. These physical symptoms may cause additional anxiety, often leading to a habitual fear response that reinforces the anxiety of public situations.

SAD is considered a disorder if it is severe enough to adversely affect social or occupational functioning.  Although it is common for many people to experience some anxiety before or during a public appearance, anxiety levels in people with SAD can become so high that they begin to avoid social situations. This fear may become so severe that it interferes with work, school, and other ordinary activities, and can make it hard to make and keep friends.

The National Institute of Mental Health says that SAD affects about 5 percent, or 15 million people. Women are twice as likely to develop the SAD as men. However, men are more likely to seek treatment.

According to the US National Comorbidity Survey, SAD is the third most common psychiatric disorder in the United States after depression and alcohol dependence.

The Diagnostic and Statistical Manual of Mental Disorders  lists the diagnostic criteria for SAD as follows:

A. A marked and persistent fear of one or more social or performance situations in which the person is exposed to unfamiliar people or to possible scrutiny by others. The individual fears that he or she will act in a way (or show anxiety symptoms) that will be humiliating or embarrassing.

B. Exposure to the feared social situation almost invariably provokes anxiety, which may take the form of a situationally bound or situationally predisposed Panic Attack.

C. The person recognizes that the fear is excessive or unreasonable.

D. The feared social or performance situations are avoided or else are endured with intense anxiety or distress.

E. The avoidance, anxious anticipation, or distress in the feared social or performance situation(s) interferes significantly with the person’s normal routine, occupational (academic) functioning, or social activities or relationships, or there is marked distress about having the phobia.

F. The fear or avoidance is not due to the direct physiological effects of a substance (e.g., a drug of abuse, a medication) or a general medical condition and is not better accounted for by another mental disorder

The key to the fear reactions of Specific Phobias is the strong, irrational, and involuntary reactions in the presence of or the anticipation of a specific place, object or situation. It causes people to avoid common everyday places, situations or objects, even though they logically know there isn’t any threat of danger. The Specific Phobia sufferer knows that their reaction is irrational, but even thinking about it can cause extreme anxiety.

There are many Specific Phobias. Acrophobia is a fear of heights. Other common phobias involve tunnels, highway driving, water, flying, animals and blood.

People with Specific Phobias try to avoid what they are afraid of. This avoidance is a key feature of the Anxiety Disorders. If a feared object or situation cannot be avoided, a person may experience:

When confronted with the feared situation or object, they may even have a panic attack.

Part one of Anxiety Disorders: Just What Are They?

Part one of this series covered the following Anxiety Disorder subjects:

These Anxiety Disorders are a catalog of human misery. But it doesn’t have to be that way. Most of the Disorders respond well and quickly to treatment using psychotherapy and/or medications. I urge you to contact a qualified mental health professional if you suspect you may have any of these Anxiety Disorders.

Related Posts:
<= Previous Posts Anxiety Disorders: Just What Are They? – Part 1
Next Posts => Shyness or Social Phobia?
1 comment… add one

Alright, This is my last and final post. Seeing a spider on someones hand every time I click on an article is one thing, but to see one on someones face is causing my extra anxiety just trying to get information and support. Whoever thought the choice was wise in this forum is either stupid or plain saddistic. I know I am not the only one who left here feeling this way without speaking out about it. Thanks for nothing but more anxiety tonight. good riddance to the person who put together this website.