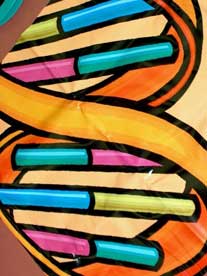 The evidence keeps building for physical causes for Anxiety Disorders.

The Met158 gene variation has been found to cause an exaggerated “startle” response among people prone to develop Anxiety Disorders.

Inborn differences may help explain why trauma gives some people bad memories and others the nightmare of Post Traumatic Stress Disorder. Scientists in Germany and the United States report evidence in a new study linking genes to Anxious behavior. The findings appear in the August issue of Behavioral Neuroscience, published by the American Psychological Association.

Although a great deal more research is needed, Christian Montag, co-author of the research, says that if this line of research bears fruit, one day

it might be possible to prescribe the right dose of the right drug, relative to genetic makeup, to treat anxiety disorders.

The specific genes involved in the study

The Met158 gene works with dopamine

The COMT gene encodes an enzyme that breaks down dopamine, an important brain chemical, which weakens its signal. The two variations of the COMT gene are Val158 and Met158.

How the research was carried out

The researchers first determined which of the 96 participants carried which variations of the COMT gene. They also administered a standard personality test to determine if the participants had any Anxious traits. Then they used a well-known test which uses pictures and loud noises to elicit the startle response.

The results of the research

The research confirms that specific variations in the gene that regulates dopamine may play a role in negative emotions. The authors speculate that the Met158 variation may raise levels of dopamine in the brain’s limbic system, a set of structures that support memory, emotional arousal and attention.

Met158 gene: focus even if bad

People carrying two copies of the Met158 variation of the COMT gene showed a much stronger startle reflex than did the other participants. Significantly, they also showed greater anxiety on a standard personality test.

The researchers offer a biochemical explanation for why some people find it harder to regulate emotional arousal. These people’s sensitivity may, in combination with other hereditary and environmental factors, make them more prone to Anxiety Disorders.

Montag says that a single gene variation can explain only a small portion of variation in Anxious behavior. Otherwise, in theory, up to half the population could be anxious! He cautions,

This single gene variation is potentially only one of many factors influencing such a complex trait as anxiety. Still, to identify the first candidates for genes associated with an anxiety-prone personality is a step in the right direction.

There is physical evidence for mental illness

There are many who deny there is any physical evidence for mental illness. This study is just one among many that shows that there is physical evidence, and new studies are coming out every few days adding to that evidence.

But one of the most important things we do know is the role of stress in Anxiety Disorders, both in those prone to it, and those who already have it. Changing your lifestyle to eliminate stress is one of the best things you can do to combat Anxiety Disorders!

Related Posts:
<= Previous Posts 8 Tips for Surviving a Party or Gathering
Next Posts => 22 Tips for Becoming a World-Class Worrier
2 comments… add one

Is there a cure for severe anxiety disorder