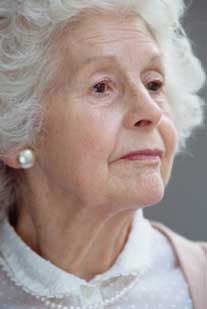 Anxiety is the most common mental disorder experienced by older adults.

Anxiety Disorders affect over 18 percent of people over the age of 60. As many as 7 percent of this age group have Generalized Anxiety Disorder (GAD), a disorder characterized by uncontrollable worries about everyday things.

Despite its prevalence, Anxiety Disorders remain one of the most undiagnosed and undertreated conditions in this age group. This is due to the failure of the current model of the primary care physician as gatekeeper model.

Studies have shown that generalized anxiety disorder is more common in the elderly … than depression, which affects about 3 percent of seniors. Surprisingly, there is little research that has been done on this disorder in the elderly.

Due to the lack of evidence, doctors often think that this disorder is rare in the elderly or that it is a normal part of aging, so they don’t diagnose or treat anxiety in their older patients, when, in fact, anxiety is quite common in the elderly and can have a serious impact on quality of life.

With the first of the 80 million “baby boomers” reaching 60 in 2006, researchers are seeing a greater need to focus attention on disorders commonly experienced by people age 60 and older. Dr. Lenze says,

Anxiety in people over age 60 might have some similarities to anxiety in those younger, but it also has marked differences. We can’t just assume that we can treat the two age groups the same. We are decades behind where we need to be in terms of research and treatments for anxiety in this older age group.

It would appear that the medical and mental health professions let the aging of the baby boomer generation slip up on them!

What are the most common Anxiety Disorders in Elders?

Anxiety Disorders are the most common mental illness in the US, affecting 18.1 percent of the population. Of the 80 million baby boomers, 14.5 million of them have or will have some variety of Anxiety Disorder, according to the National Institute of Mental Health.

People with Anxiety Disorders are 3 to 5 times more likely to go to the doctor to seek relief for Anxiety symptoms that mimic physical illnesses than those in the unaffected population. The Anxiety Disorders Association of America says that this accounts for 16 percent of the country’s entire mental health bill.

Anxiety Disorders commonly found among those 60 years and older are:

Primary care physicians are the key element in Elder care

Medicare and most managed health insurance providers use a “gatekeeper” system wherein the primary care physician is the first contact for the patient with a complaint. That means that an elder complaining of Anxiety-based symptoms will see her primary care physician first, and if necessary, be referred to specialists.

Primary care physicians have been well-trained to test for and spot depression among their patients, but not so for Anxiety Disorders. Drs. Wayne Katon and Peter Roy-Byrne of the Annals of Internal Medicine say in an editorial,

Accurate recognition of anxiety disorders in primary care is the first step in providing effective treatment and potentially preventing development of major depression and social and vocational impairment.

Serious failure in the management of Anxiety Disorders

Screening for Anxiety Disorders is a necessary first step in the treatment of Anxiety. But the evidence tells us that making a diagnosis is not sufficient to improve the quality of mental health care and outcomes among primary care patients with Anxiety Disorders. Drs. Katon and Roy-Byrne say,

Studies have shown that primary care patients who are accurately diagnosed with anxiety disorders have important gaps in the mental health care that they receive, including poor adherence to psychoactive medications, poor follow-up by primary care physicians, and infrequent exposure to … psychotherapies (such as cognitive–behavioral therapy).

These findings, together with the high prevalence of anxiety disorders, indicate a serious failure in the management of anxiety in the primary care setting.

Collaborative care is the most effective model

It has been found that collaborative care models are an important element in improving the quality of mental health care. They use allied health professionals, such as nurses, to support primary care physicians. Psychiatrists and psychotherapists may also be on the team.

A care manager, such as a nurse, provides patient education, closely follows patients, tracks adverse effects of care, monitors adherence to care programs, monitors progress, and facilitates return visits with the primary care physician if progress is not being made. In the most successful collaborative care programs, a psychiatrist supervises the care manager and recommends medication adjustments.

Health care is not ready for the Boomers

It is obvious that a significant proportion of the US population is reaching 60 years old. But medical and mental health are ill-prepared for the sudden millions of patients over 60. There are fewer gerontologists than in past years, and few being trained. The psychiatrists and psychologists who are specially trained in gerontology are scarce as hen’s teeth. Even the system of primary care physicians must be completely remade to take care of the flood of new elders.

I have worsened anxiety, my Husband (whom I found hanging) and my pet dog died almost 6 months to the day after my Husband, I couldn’t learn, driving got worse, never did sleep, but this all happened when I was 55, now over 60 and having meltdown.

Yes, Doctors don’t understand my lack of sleep, they prescribe things like Ambien, that didn’t help at all.

Nothing “knocks me out”, sad, but true. Now I had some anxiety medicine it worked then it was stopped because I didn’t follow through with an appointment, now my head is “zinging” like an electric fence. Hate it.

Hi Bonnie,
I’m so sorry you are experiencing so much anxiety after your husband’s death.

I’ve finally found a combination of medications that help me get a good night’s sleep: Seroquel plus Trazodone. Without the Seroquel I was able to go to sleep, but not able to stay asleep. Adding the Seroquel helped me to stay asleep. The only drawback is that I’m groggy when I wake up, but I’ll take that over three-hour’s worth of troubled sleep any day.

Good luck to you!