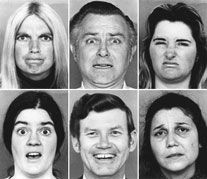 A recent study has found that highly anxious adults can perceive changes in facial expressions much faster than adults who are not anxious.

But they jump to emotional conclusions based on a quick glance of the facial expression of others.

And highly anxious adults may make more errors in judgement and perpetuate a cycle of conflict and misunderstanding in their relationships.

Co-author R. Chris Fraley, a professor of psychology at the University of Illinois said,

[H]ighly anxious individuals — people who are very insecure about their relationships — are more vigilant in monitoring the facial cues of others, but also make more mistakes in interpreting the emotional states behind facial expressions.

How the study was conducted

Highly anxious adults were more sensitive and much more likely to jump to emotional conclusions, thus undermining their ability to perceive emotions accurately.

However, when highly anxious adults were forced to take the same amount of time as everybody else, they were able to judge emotional states more accurately than less-anxious adults.

This “hair trigger” style of perceptual sensitivity may be one reason why highly anxious people experience greater conflict in their relationships. The irony is that they have the ability to make their judgments more accurately than less-anxious people, but, because they are so quick to make judgments about others’ emotions, they tend to mistakenly infer other people’s emotional states and intentions.

With Fraley, the paper’s co-authors are psychologist Paula M. Niedenthal at the National Center for Scientific Research and the University of Clermont-Ferrand in France, and Illinois graduate students Michael Marks, Claudia Brumbaugh and Amanda Vicary. The researchers reported their findings in the August, 2006 issue of the Journal of Personality.

I can think of many scenarios in my life where my jumping to emotional conclusions precipitated “undesired results.” How much emotional strife and bickering could be avoided if we just acknowledged that we jump to conclusions based on half-perceived facial expressions!

If you have enjoyed this article, please consider subscribing to this blog, either via RSS or email at the top of your screen.

I would also appreciate it if you shared this article with your favorite social media, such as StumbleUpon or Digg. Just click the little green “ShareThis” button at the bottom of this post.

Related Posts:
<= Previous Posts Clinomorphism: You Know Somebody Who Is Guilty of It!
Next Posts => Saturday Summary: 50 Ways to Calm Your Anxiety, the New Look, and Psychotherapy Going Down the Tubes
2 comments… add one