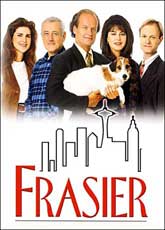 Television programs like “In Treatment,” “Frasier,” and “The Sopranos” may discourage people from seeking psychological treatment, a new study shows.

Frasier Crane and his brother, Niles both practiced psychiatry on their popular NBC sitcom “Frasier.” Mob boss Tony Soprano had his therapist on HBO’s hit show “The Sopranos.” And HBO has even made therapy the focus of two recent shows — “Tell Me You Love Me” and “In Treatment.”

The research suggests that television’s portrayal of psychological counseling has a profound influence on audiences. Douglas Gentile, one of the study’s authors, said,

Therapists … often are portrayed as buffoons. That’s either by being the jokester, like Frasier, or by being the butt of jokes. In either case, these are not positive portrayals. They do not show the skill, expertise and ethics of professional therapists.

The study was conducted by Gentile, David Vogel and Scott Kaplan of Iowa State University. It was published in the March issue of the Journal of Clinical Psychology.

Kaplan has conducted a content analysis of television portrayals of mental health professionals. He found that they’re not favorable. Vogel said,

Generally, it seems like therapists are portrayed unethically — like sleeping with the client, or implanting false memories, or talking about their clients outside the session. These are things that almost never happen with real therapists, but on a show — because they’re probably more exciting — they happen more frequently.

But it’s not just the portrayal of the therapists that may be keeping people out of therapy. It’s also how those seeking counseling are shown. Vogel commented,

If you examine the portrayal of the clients, it’s probably as bad or worse. So why would you seek therapy if you believe you’re going to be perceived negatively and you’re going to see someone who’s incompetent and not able to help you?

Television’s ties to the stigma of therapy and treatment

The study found a correlation between viewers’ exposure to comedy and drama shows and their perceptions of the stigma associated with seeking professional help. This stigma was then related to lower willingness to seek professional mental health services. Vogel said,

One of the things that’s important to note about this particular study is that we showed that TV exposure was related to your perceptions of the stigma associated with seeking help, which has been found to be one of the main factors found from inhibiting people from seeking that help. So you perceive that yourself, and other people, would be crazy to go [to therapy].

That’s a real problem for most people who could benefit from professional mental health services.

The most recent studies in the mental health field have found that about half the population experiences a situation at some time in their lives where psychological therapy could be helpful. About 20 percent a year could benefit from counseling. But in a given year, only about 10 percent of people who could benefit will actually seek help. That’s only 6.1 million out of 61 million people!

I explored the stigma of mental illness in the articles Scapegoating and the Stigma of Mental Illness Part 1 and Part 2. In those articles I said that there is a real and vicious stigma against having a mental illness.

Related Posts:
<= Previous Posts Medications for Anxiety, Panic and Phobias
Next Posts => Saturday Summary: The How of Happiness, Website Changes, and Upcoming Articles
5 comments… add one

I have had agoraphobia for 20 years. I have also had different experiences over the years. I find it sad that people cannot separate TV from reality. I watched “In Treatment” and despite his behavior that is needed to make a show, I liked him. He at least seemed to listen. I also felt the same away about “The Sopranos”. I have yet to find a doctor that cares about me more than either money or themselves. I have been to so many. Right now I have a psychiatrist that I see for 15 minutes every month or so. Sometimes I time it and it’s really only 3-7 min. It is called “Medication Management”. I have been seeing him for 12 years. I take 100mg. of Zoloft and 5mg. of Alprazolam a day. I was on 4 a day of alprazolam but it wasn’t working the same way and it became a battle with the Dr. to raise it to 5. I have been on this combo for 12 years. I have been on xanax for 18 years. I have never had a medication with such a huge stigma attached. It seems to be the only thing that gets me out the door and have some kind of life. I always feel like I have to say “I’m sorry” for taking it. I have been through several therapists since I came to Reno. The one I have now I liked until she called me at home and yelled at me for rescheduling an appt. that I was too sick to attend. It seemed so out of character for her until I saw that Medicare pays her $158 plus my co-pay. She is using EMDR with me and I’m not sure how I feel about that. I’d like to know what your opinion of it is.
What it boils down to is what keeps me and others that I know from seeking treatment is the quality of it. I don’t know if it has to do with money, they seem to be doing really well. They get paid the same weather they do a good job or not. I continue to look but I am getting jaded. I would love to be able to have an hour with someone I could really open up to and deal with this agoraphobia the way it should be.

The psychiatrist I had before we moved to this city was a rare breed: he DID care, he listened, and he even waived his copay when I started having financial troubles. The one I have now sees me for 15-20 minutes every 3 months. She goes down her checklist and listens briefly. It’s better than nothing, but I really miss my previous psychiatrist.

I like my current psychotherapist. He listens well, and answers fully when I ask. He’s not tied to any one methodology, like CBT or EMDR, but does like mindfulness and some of the more Eastern-flavored ideas. He’s helped me a lot.

I take 6 medications for my bipolar/Panic Disorder/Agoraphobia/Social Phobia. It has taken almost four years to work out the right combination, but I am doing well right now. I still have problems with some things, but at least I’m getting out of the house some! I take .5mg of Alprazolam on an as-needed basis, as many as 4 a day. I have taken 5 from time to time when I needed it, just didn’t tell the doc about it! I took Xanax XR for about two years when I was really, really bad off, but as I got better, the doc substituted the Alprazolam due to concerns about dependency.

Yes, Xanax and all of the Benzodiazepines like Valium and Ativan have a terrible stigma attached. It’s like people think you’re a hysterical wreck if you have to take them to get by, some weak-willed jelly-spine.

I used to worry about what people thought of me, my mental condition, the things I had to do to manage my condition, and my medications. I have lost a lot of “friends” over it. My brother and sister and in-laws have become very distant because of it. But they’re not the one that has to rise above the suffering and make a life, and I am. So I now just let the chips fall where they may.

I don’t know enough about EMDR to have an opinion, frankly. None of my therapists have used it, and I don’t know anyone who has been under EMDR treatment. According a study by Seidler and Wagner in 2006, it is as effective as CBT with PTSD. There are several studies ongoing to test its effectiveness versus other therapeutic methods such as CBT, but no conclusions yet.

I am planning a series of articles on different therapeutic methods in the near future, and EMDR will be one of them. I would welcome further comments from you about EMDR treatment, since you’re the first person I’ve met with any experience with it.

I’ve had many therapists over the years, and I have not been shy about trying them out and leaving them if I felt I was getting nowhere. It’s me that’s suffering, after all!

I’ve found that many therapists just do not understand or empathize with Agoraphobia. They try to treat the symptoms, but never get down to the roots of the problem. My current therapist is the first I’ve had that has really done me any good with it. We’re working on why I have it, as well as how to get over the symptoms.

Thank you, Donna, for leaving your comment. I hope you stay in touch. If you would rather email me rather than use comments, you can do so using the “Contact” tab at the top of the screen.

You know, it’s interesting hearing people talk about doctors who don’t actually care about them.
I’m a psychology student. I want to go to grad school and be a practicing clinical psychologist (psychiatrist would take too long and cost too much)
And I really do love people and want to help make their lives better.
I do have a medical condition though, and so I also see a psychiatrist. When I first got sick, it was horrible, and lasted so long and I started off with someone I didn’t know if I liked or not (because I couldn’t think clearly… depression, you know). But I couldn’t stay with him because of ethical reasons (he was supposed to be involved in studies, like the one that got me seeing him in the first place, thank god for it). So I got shipped off to this other psychiatrist. She tried to tell me what to do sometimes… and when I told her about side effects I was feeling, she didn’t believe me. I was always lying to her and it wasn’t good for me. So I talked to a friend of mine, and she told me I should see this psychiatrist at my school
He is a dream. At first I saw him for an hour each month because I needed it. He listened to the side effects and came up with a solution. Whenever I have a problem he helps me find a solution. When I realized that I was always still too low, he put me on anti-depressants (a really low dose because I’m bipolar (although that’s still pretty laughable.. mania my ass)) and they kicked me up. When those had bad side effects, he found another solution. Now I only need to see him for 1/2h every couple months to check in and pick up prescriptions. He changed my life and now I can live and breath and process and read again. I actually feel like a human being most of the time.

So yes, there are good psychiatrists out there. I don’t know if it’s because I live in Canada and the health care system is better here or what, but I actually haven’t heard too many horror stories… except when people are unwilling to stop seeing a doctor that is no good for them. But as far as I’ve heard, if you search, you find what you’re looking for