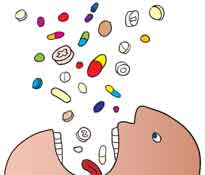 If you are suffering from an Anxiety Disorder, you may be facing the issue of whether to take medications or not. It may even increase your anxious worrying!

Excessive worry is a symptom of Anxiety Disorders. It is common for the issue of taking medications to become a focus of worry.

And excessive worry is often associated with procrastination and difficulty with decision making. This makes the task of deciding about the use of medication all the more difficult.

Medication for the treatment of Anxiety is generally safe and effective. But it often takes time and patience to find the drug that works for you.

The first treatment many people receive for Anxiety Disorder is therapy. Most psychologists believe that the most effective treatment for Anxiety is Cognitive-Behavioral Therapy (CBT). It has two components: cognitive and behavioral. The cognitive component helps people change thinking patterns that keep them from overcoming their fears. The behavioral component seeks to change a person’s reactions to Anxiety-provoking situations. CBT is effective in a majority of cases.

But some people find that excessively high levels of Anxiety make them unable to get the most out of therapy. They may avoid therapy sessions or feel unable to carry out the instructions of the therapist between sessions.

Medication may help these people’s overall levels of Anxiety and allow full participation in therapy. Those without access to CBT or those who have not had a satisfactory response to it may benefit from medication, as well.

For some, though, medication may be required from the beginning of their diagnosis. This is particularly true in panic attacks, Panic Disorder, Post Traumatic Stress Disorder, and General Anxiety Disorder sufferers who have chronic insomnia.

Remember that it is important to give medication a fair trial. Some drugs take several weeks to take effect. If one drug doesn’t work, the odds are that another one will, so don’t give up hope!

The Varieties of Medications

There are four major classes of medications that are used in the treatment of Anxiety Disorders:

The Benzodiazepine class of drugs was introduced in the 1960’s. Brands include Ativan, Klonopin, Halcion, Xanax and Valium and the generic Alprazolam. The exact mechanism of how these drugs work is unkown. Some research has shown that they enhance the function of gamma aminobutyric acid (GABA) in the brain.

Long-term use may require increased doses to achieve the same effect. This may lead to problems related to drug tolerance and dependence. Abruptly stopping the drugs may result in significant withdrawal symptoms, including rebounding Anxiety and insomnia.

Concerns about the long-term effects of the Benzodiazepines has led many doctors to favor the Tricyclic Antidepressants for treatment of Anxiety. This class of drugs was first introduced in the 1950’s. Brands include Adapin, Anafranil, Elavil, Norpramin, Sinequan, and Vivactil.

The Tricyclic Antidepressants are prescribed for Panic Disorder, Post Traumatic Stress Disorder, and General Anxiety Disorder. Of all the Tricyclic Antidepressants, only Anafranil is used for Obsessive-Compulsive Disorder. They work by affecting the concentration and activity of the neurotransmitters serotonin and norepinephrine, chemicals in the brain thought to be linked to Anxiety Disorders.

Although effective in the treatment of Anxiety Disorders, the Tricyclic Antidepressants  can cause significant side effects. These include a drop in blood pressure on standing, constipation, urinary retention, dry mouth and blurry vision.

The Selective Serotonin Reuptake Inhibitor class of drugs was introduced in the 1980’s for the treatment of depression. Testing of this medication class led to its being used for treating Anxiety Disorders. Brands include Celexa, Lexapro, Paxil, Prozac, and Zoloft. SSRI’s work by affecting the concentration and activity of the neurotransmitter serotonin.

The SSRI’s quickly gained popularity for treating all types of Anxiety Disorders. Doctors and patients liked them because they generally produced fewer side effects, especially when compared with the Tricyclic Antidepressants. However, there are side effects with the SSRI’s. Among them are insomnia or sleepiness, sexual dysfunction, and weight gain.

The Serotonin-Norepinephrine Reuptake Inhibitor class of drugs were first used for depression. They later were discovered to be effective for Anxiety Disorders, as well. Brands include Effexor and Cymbalta. They work by increasing the levels of serotonin and norepinephrine in the brain.

The SNRI’s are used to treat all types of Anxiety Disorders, although the use in Post Traumatic Stress Disorder has not been fully researched.

The SNRI’s side effects include stomach upset, insomnia, headache, sexual dysfunction and a minor increase in blood pressure. Both Effexor and Cymbalta cause withdrawal symptoms in people quitting the drugs.

The newest class of drugs used to treat Anxiety Disorders are called “second-generation” drugs, or Atypical Antipsychotics. Brands include Abilify, Geodon, Risperdal, Seroquel, and Zyprexa. They work by effecting the concentration and activity of the neurotransmitter serotonin, a chemical in the brain thought to be linked to Anxiety Disorders.

The only Anxiolytic drug used for Anxiety Disorders is BuSpar, which is usually prescribed only for General Anxiety Disorder. It works by enhancing the action of serotonin in the brain.

If you and your doctor have decided on medication as a treatment option, you have many choices. Work with your doctor to find the medication that is right for you. With patience and persistence, you will find a treatment that will help alleviate your Anxiety symptoms.

Always remember that any psychiatric medication is intended to combat the symptoms of Anxiety — they are not a cure. Therapy is the first choice among treatments. It can help you learn how to manage your symptoms, not only in the short term, but for the rest of your life.

What Do You Think?

It seems like I have taken almost every one of the drugs mentioned in this post! It has taken quite a while for my psychiatrists to find a combination of drugs that are effective for both my Bipolar Disorder and my Anxiety Disorders. But now I feel better than I have in years.

Digg. Check out the icons below under “Share This Article With Others” for other social media, including del.icio.us, Technorati, Sphinn, Friendfeed, FaceBook and MySpace! You can also email or print the article, and even tweet it using Twitter!

Anxiety Medication Chart from the Anxiety Disorders Association of America

Related Posts:
<= Previous Posts Denial: Why People Don’t Get Treatment for Anxiety
Next Posts => TV Portrayal of Psychologists Keeps People from Getting Treatment
16 comments… add one

Thank you for this post. If you want to know more about therapy just click the link.

Hello We simply wanted to allow you know, We really like the written on your web site. However I am using Firefox on the machine running version 9.04 associated with Mac os x and the actual Urinary incontinence aren’t very proper. the essential offer, I nevertheless essentially read the actual posts and look for info, but just desired to inform a person about. The actual navigation club is kind of challenging to apply using config I’m running. Keep up the actual good work!

I HAVE HAD ANXIETY FOR 3 MONTHS, TINGLING IN FEET AND HANDS. TRIED ALTERNATIVE DID NOT WORK. CONSIDERING AN ANTIDEPRESSANT BUT SCARED TO BECAUSE I DO NOT HAVE A TOLERANCE TO MEDICATIONS. WHAT DO I DO

I have been on Zoloft (150 mgs) for about 4 years now and have had the worst anxiety ever in the past month or so. I want to stay away from Benzos so any suggestions what anti-depressants can help with this awful anxiety? I have tried Celexa and Wellbutrin in the past, both did not help in the least. Thanks in advance for your responses!

I suffer with chronic back pain when they give me fentanyal &moriphine for the pain.lsuffer at times with serious anxity and spasium iask if forr valium it has worked in the past for me.they refuse because they say it is addictive explain this to me please

These are truly impressive ideas in about blogging. You have touched some pleasant points here.
Any way keep up wrinting.
anti anxiety recently posted…anti anxiety

Hey there are using Wordpress for your site platform?
I’m new to the blog world but I’m trying to get started and create my
own. Do you need any coding knowledge to make your own blog?
Any help would be really appreciated!
Signs Of Anxiety recently posted…Signs Of Anxiety

Downloading Cube world normally expenses cash.
I will give you Cube Entire world total variation which you can download right here for free
of charge. Yes you will be capable to enjoy Cube Entire world in a couple
of minutes here for free of charge, all you have to do is down load
Dice Globe with the url provided right here. We incorporated
Cube Globe crack so soon after you put in Cube Entire world Alpha, you can engage in it instantly.
Cube World is a 3D action RPG variety sport that is produced/created by Wollay and
his spouse. Cube Planet was commenced in June 2011 and now, the Alpha edition is out already.
cube world multiplayer recently posted…cube world multiplayer

I am an excessive worrier. Its amazing how bad it affects my energy levels. I could sleep ten hours and still be exhausted all the time. No energy to exercise or lack of motivation to get out of bed. Anyone have any experience with any medications that would help with this?

After going over a few of the articles on your site, I honestly appreciate
your technique of blogging. I added it to my bookmark webpage
list and will be checking back in the near future.
Please check out my website too and let me know what
you think.
domain recently posted…domain

Thanks for this article. Its very informational about anxiety medications. I am glad that you have conquered your fear through medication. I have tried medication for anxiety , but it didn’t help me that fast. So I took CBT therapy at Phobiaman Clinic. I found therapy sessions much better than medications. Now i am fine and living my life happily

There’s a vast variation in individuals’s wants. However as a normal rule, if you’re getting at the same time as little as 5 or 6 hours of restful sleep each night time, as an alternative of the accepted thought of Eight hours, and also you get up within the morning refreshed and invigorated, there may be no need for concern.

Thank you for sharing this post.Iam highly interested on this anxiety.