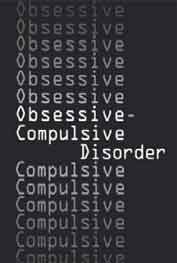 Cambridge University researchers have discovered that there is a definite altered functioning of the brain in Obsessive-Compulsive Disorder (OCD) sufferers, as well as in their immediate relatives. This is yet another proven genetic link to OCD.

The study measured activity in a region of the brain that could help to identify people at risk of developing Obsessive Compulsive Disorder (OCD).

The current diagnosis of OCD is based on a clinical interview and often does not occur until the disorder has progressed. This new discovery could enable earlier, more objective detection and intervention. Dr Samuel Chamberlain, who led the study, explains,

This study shows that these brain changes run in families and represent a … vulnerability factor [for family members]. The current diagnosis of OCD is subjective and improved understanding of the underlying causes of OCD could lead to more accurate diagnosis and improved clinical treatments.

The scientists have discovered that people with OCD and their close family members show under-activation of brain areas responsible for stopping habitual behavior. This is the first time that scientists have associated functional changes in the brain with familial risk for the disorder.

The National Institute of Mental Health estimates that 2.2 million, or about one and a half percent of Americans currently have OCD. It will affect 2 to 3 percent of the population — 6 to 9 million — at some time in their lives.

Obsessive compulsive disorder can be a debilitating condition. Patients suffer from recurrent intrusive thoughts (obsessions) that are distressing and hard to suppress. Examples include fears of contamination, or that something terrible will happen to a loved one. They also suffer from repetitive rituals (compulsions), which are often designed to neutralize these thoughts. Examples include hand-washing and checking locked doors. These symptoms cause distress and can occupy hours during the day, interfering with quality of life and the ability to work.

Although OCD tends to run in families, genetic factors responsible for this heritability are not known. Genes may pose a risk for OCD by influencing how the brain develops. 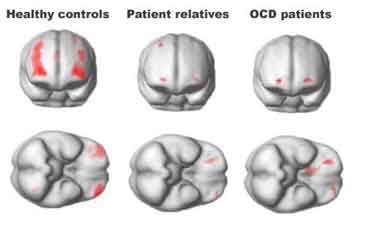 Dr Chamberlain at the University of Cambridge’s Department of Psychiatry used functional magnetic resonance imaging (fMRI) to measure brain activity in the lateral orbitofrontal cortex (OFC) portion of the brain. Located in the frontal lobes, the lateral OFC is involved in decision making and behavior.

Fifteen volunteers without a family history of OCD, 14 people with OCD and 12 immediate relatives of these patients took a variety of tests while being monitored with the fMRI. Later comparison of fMRI images of their brain activity throughout showed under-activation in the lateral orbitofrontal cortex and other brain areas in both the OCD patients and their family members.

… much work is still needed to identify the genes contributing to abnormal brain function in those at risk of OCD. We also need to investigate not only vulnerability factors, but also protective factors that account for why many people at genetic risk of the condition never go on to develop the symptoms.

The findings of the study are reported in the July 18, 2008 edition of Science. It was funded by the Medical Research Council and Wellcome Trust.

Do you know someone with OCD? Do their family members have it too? Do you think there are family vulnerabilities for other Anxiety Disorders, too?

Hi Mike, I read with interest your article, but ended up feeling frustrated and saying, “so what?” I guess this was just intended as an FYI, but you had me so captivated and hopeful that you were going to actually give some helpful information at the end. Do you think a traumatic brain injury to the frontal lobe could have a role in OC behavior since the lateral orbitofrontal cortex is located in the frontal lobe? And is there anything that can be done besides warning our progeny that they may have our OC gene?

July 22, 09
I have read your interesting article. There have been other definitive OCD studies since that tend to agree with your indications.

My inteerest devolves from my development of the field of HEMOENCEPHALOGRAPHY (HEG). My web site details the technique. In short it allows voluntary activation by the subject of a chosen site on the brain. I am currently treating a florid case of OCD by activating a location of minimal grey matter density medial to Fp1, I named it AFp1. (ref Brain 130 12 9/13/07 Menzies et al)
The objective is to improve the coupling to the Ant. Cing and the amygdala.

I would enjoy a talk with you about the technique and the prospects.
Hershel Toomim Sc.D.

Magnificent beat ! I would like to apprentice
even as you amend your website, how could i subscribe for a
weblog site? The account aided me a appropriate deal.
I had been a little bit acquainted of this your broadcast offered brilliant transparent concept

I have read so many articles or reviews concerning the blogger lovers but this piece of writing
is really a good article, keep it up.