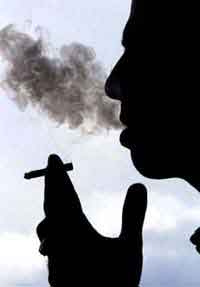 It has been estimated that 21 percent of adults in the United States (about 45 million people) currently smoke. It has also been found that individuals who have Anxiety Disorder may be particularly likely to smoke. Out of all Anxiety Disorders, individuals with Panic Disorder and Post-Traumatic Stress Disorder show the highest rate of smoking.

Smokers are twice as likely to suffer Post-Traumatic Stress Disorder as non-smokers, according to a recent study of male twin soldiers. The researchers also found that people exposed to trauma, whether or not they developed PTSD, were more likely to take up smoking.

About one-third of people go on to suffer Post-Traumatic Stress Disorder after experiencing severe trauma, according to estimates. PTSD is a mental illness characterized by Anxiety, flashbacks and panic attacks.

Karestan Koenen, the lead researcher in the study, believes there is a genetic link between smoking and PTSD. She said,

Nicotine dependence has been associated with PTSD before, but the exact nature of the link has never been clear. The new study establishes smoking as a key risk factor in pre-disposing people to PTSD.

Koenen and colleagues at the Harvard School of Public Health in Cambridge, Massachusetts, looked at the health records of 6744 pairs of male twins who had served in the US military during the Vietnam era, about half of whom were identical twins.

The researchers found that shared genetic factors explained 63% of the overlap between PTSD and nicotine dependence in the twins.

But Koenen discovered that those who had a history of smoking and who were then exposed to trauma had twice the risk of developing PTSD, compared to non-smokers who experienced trauma.

Koenen speculates that smoking may make one more likely to get PTSD. She said,

Nicotine stimulates some of the same neurobiological pathways – the dopaminergic pathway associated with reward and fear – implicated in stress and addiction. Smoking may sensitize these pathways, so a subsequent severe stressor is more likely to give someone PTSD.

Koenen does not know “whether giving up smoking makes the increased risk go away.” She suggests the military conduct smoking cessation and anti-smoking programs. In addition, she thinks that they should pay extra attention to caring for soldiers with a history of smoking who are deployed in combat situations.

Do you know someone with PTSD? Are they a smoker? I’d like to hear your story!

very nice post i think it is about me