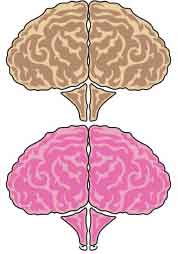 Anxiety Disorders are one of the most common psychiatric conditions. It is estimated that between 10 and 20 percent of the American people aged 18 and older suffer from some sort of Anxiety Disorder. That’s 30 to 60 million people!

New research from the University of Illinois groups these dozen disorders into two different types based on brain activities:

These two kinds of Anxiety may occur alone or in combination, with potentially important implications for treatment. Previous studies and treatment have not always differentiated between these two types.

Whether you want to treat anxiety psychologically or biologically – and we know that either type of intervention affects both the psychology and the biology of the person – [our] findings are a reminder that you might want to assess people carefully before you embark on a particular type of treatment.

He further states that this study “… is biological validation of the proposal of the psychological differentiation of types of anxiety.” The study by University of Illinois researchers appeared in the May, 2007 issue of Psychophysiology.

How the research was conducted

The researchers, Dr. Miller and Wendy Heller, used functional Magnetic Resonance Imaging (fMRI) to map the brain areas with increased neural activity during a variety of psychological probes. They selected 42 subjects from a pool of 1,099 people using psychological tests to separate them into groups with “high anxious apprehension” and “high anxious arousal.” These subjects were further selected as having no mood disorders or other complicating factors.

The anxious arousal group had more activity in a region of the right brain believed to be involved in tracking and responding to information signaling danger.

Other studies using electroencephalographic (EEG) methods had found that patients diagnosed with Generalized Anxiety Disorder and Obsessive-Compulsive Disorder had heightened activity in the left brain. Patients with Panic Disorder, panic symptoms or those subjected to high stress situations exhibited enhanced activity in the right brain.

The University of Illinois study is the first to localize the affected regions within each brain hemisphere that seem to matter to the different kinds of Anxiety Disorder. In addition, a related and important finding was to distinguish the left-brain region involved in anxious apprehension from a nearby structure that is associated with positive emotional processing.

The implications of the study

It is interesting that the apprehension group, characterized by Miller and Heller as having “high anxious apprehension” with a tendency toward verbal rumination and worry, should be associated in the brain with the speech centers. These are among the symptoms of a number of Anxiety Disorders, such as Generalized Anxiety Disorder.

It is even more interesting that the “high anxious arousal” group, characterized by intense fear, panic, or both, should have activity in the part of the brain associated with signaling danger. This is a symptom of mental disorders such as panic attacks, which can lead to Panic Disorder.

This study is further proof that Anxiety Disorder has a definite basis in the brain, and is not entirely a product of environmental factors or a person’s character. Unfortunately, our society and too many people with Anxiety feel that they are personally to blame for their problems, that it is just a “character flaw.” The stigma that accompanies Anxiety and other mental disorders leads to untold suffering each and every day.

It is intriguing to think that this finding might lead to an entirely new classification system for Anxiety Disorders, and with that, new modes of treatment.

Hi, and good luck, Mike. I’ve just skipped through your blog, as I also have what I call panic disorder, that is mostly controlled by medication. And effort.

The single thing that helped me most, many years ago, was an outfit called Recovery (http://www.recovery-inc.org/Tools_0507.html). It was founded circa WWII by a psychiatrist who was ostracized by his peers. What it offered was neither therapy nor medication: it offered a way to cope, day in and day out, with panic attacks, as well as other mental disorders. It’s out of date and simplistic, in the “simple but not easy” sense of “simplistic.” The collection of slogans–mantras you can tell yourself when you’re too panicky to think straight–are life-saving. And he insists that you can do it. One of his basic tenets was, “Let your muscles re-educate your brain,” by which he meant, “Do it, bearing the discomfort, and your fears will decrease.” Everything I’ve read about how to cope has been a restatement of principles he laid out many many years ago.

I’ve gotten far enough along with my Panic Disorder that I do not take medication daily, though I still carry Alprazolam with me in situations that might trigger a panic attack. Fortunately, I have not had to use it in quite a while.

And it is an effort to manage Panic Disorder, especially at first. I have found the coping methods I’ve learned to become a habit over time.

I will have the Panic Attacks reference document up this afternoon. It has turned into a 5,000 word dissertation, but I felt it necessary to cover the subject fully and accurately.